Understanding Rural Attitudes Toward the Environment and Conservation in America 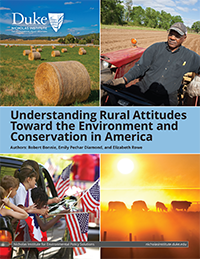 Rural Americans matter—a lot—to the fate of U.S. environmental policy. Not only do farmers, ranchers, and forest owners manage huge portions of American lands and watersheds, but rural voters also have an outsized impact on national policy. While rural Americans express support for natural resource conservation, they and their elected officials often voice less support for existing federal environmental policies and laws. Congressional action on a variety of environmental issues has been impeded by opposition from rural stakeholders.

Why do rural voters and their representatives often oppose environmental regulations? What accounts for this apparent rural/urban divide on attitudes toward environmental policy? Are there alternative policies, communications strategies, or, more broadly, ways to engage rural voters and constituencies that might bridge the urban/rural divide on the environment? This study seeks to answer these questions.

Broadly, our study suggests that the urban/rural divide on the environment is not a function of how much rural voters care about the environment. Nor is it a function of how knowledgeable they are—rural voters appear relatively sophisticated about environmental issues. We do find that voters from rural America are more likely to view where they live as being an important part of how they define themselves which in turn shapes their views, including on environmental policy. Attitudes about the government are a clear dividing line between rural and urban/suburban voters, particularly regarding differences in the level of trust toward the federal government. Views toward climate change are polarized across the urban/rural divide with rural voters being more skeptical of both the science of and governmental response to climate change. Our study suggests, however, that there are opportunities to engage rural voters on climate change and environmental policies generally.