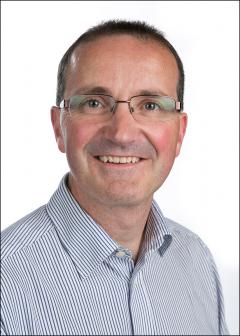 Throughout April, the Nicholas Institute for Environmental Policy Solutions at Duke University hosted Dr. Paul Bolger, manager of the Environmental Research Institute at University College Cork in Ireland. Bolger is a 2019 Fulbright Irish Scholar who is investigating how interdisciplinary approaches are being utilized at four American universities—Duke, Arizona State, Columbia, and Cornell—to address global sustainability challenges. During his month in Durham, Bolger conducted surveys and interviews with Nicholas Institute staff and Duke faculty and administrators to get their perspectives on the institute’s work.

Bolger took a few minutes toward the end of his stay to talk about his research and what he learned about the Nicholas Institute. Below is a transcript of the conversation. It has been lightly edited and condensed for clarity.

Nicholas Institute: What interested in you studying interdisciplinary research at other sustainability research institutes?

Bolger: There’s a long-held viewpoint that the global sustainability challenges that we’re facing—such as climate change, water resources, plastic pollution—that they require the cooperation of scholars from different disciplines to solve them. So for example, for climate change, that might be atmospheric modelers; it might be hydrologists; it might be energy modelers; it might be sociologists and lawyers. Each would take a piece of that jigsaw and solve it. The idea is that you get a more robust outcome when you’ve got lots of different disciplines thinking about that problem.

If you’ve only got one discipline, you get a very singular viewpoint. The difficulty with that is that if you are trying to implement new solutions and technologies that there could be multiple issues with it that have not been considered. A good example here is the introduction of new renewable technologies such as wind farms or solar power. The engineers might think, “This is fantastic. This is going to solve all of our energy problems.” But of course, politicians might not like it. Communities might not like it if they don’t want wind farms in their backyard. And there might be lots of other opposition. So we need political scientists, we need the lawyers, and we need sociologists and psychologists studying how we actually implement those technologies in a real-life situation. So that’s one of the basic advantages behind doing interdisciplinary research, i.e. making research outputs more robust and relevant.

The key thing about interdisciplinary work—as distinct from what’s called multidisciplinary—is that the scholars work together in an integrated manner. They don’t go off and do their own pieces in silos and come back at the end and say, “Here’s my piece.” They work together in a process like co-production. Each of them has to have a slight understanding of what the other person is doing so they all come to a common understanding of what the problem is and what the solution might be.

Nicholas Institute: In your research so far, what are some of the common themes that you’ve seen in terms of how these institutes apply an interdisciplinary approach to their work?

Bolger: If I could back up a little bit, I should say why I’m interested in institutes specifically. Universities tend to have very few vehicles for integrating different disciplines. Most universities tend to be set up along the classic disciplinary lines. You’ve got the sciences; you’ve got the humanities, medicine, arts, and business. There can be very few ways that you can cross those particular silos. An individual can. There’s nothing stopping someone in the school of sociology from reaching out to someone in the school of engineering. That happens lots of times. But it’s a kind of ad-hoc process.

Nicholas Institute: But that formal mechanism might not necessarily be there?

Bolger: Correct, so the institute is a formal structural mechanism for doing interdisciplinary research within a university. Many of these institutes have a reach right across the university and have a remit to bring scholars together to work on particular topics. It might be around poverty; it could be around social justice; it could be around sustainability. So I’m interested in sustainability research institutes. If they all have a mission to do interdisciplinary work—the ones I’m looking at—the question I’m asking is, “What does that look like in reality? On a day-to-day basis, what does it mean to do interdisciplinary research?” What I’ve been doing within the institutes is trying to look under the hood and to understand that a bit more.

I’ve been doing that in two ways. One way is through surveys of staff and affiliated faculty where you ask them what their understanding of interdisciplinary work is, how they think the institute is facilitating that, and how they might be able to do better. And I’m supplementing that with interviews with staff, leadership, and leadership within the university of how they feel the institute should be facilitating it.

The position that I would be coming from would be that the role of institutes has been somewhat overlooked for too long. If you look at the literature on interdisciplinary work, centers and institutes don’t feature that often even though many of these centers have been around for 30 to 40 years. So I am interested in seeing what is the reality of the interdisciplinary work of institutes on the ground and how does that vary by university. Each university is context specific, so the Nicholas Institute is quite different from the Julie Ann Wrigley Institute that I visited at Arizona State University. So what difference does that make?

Bolger: It’s somewhat different. Part of the reason for that is that the Nicholas Institute is a very externally facing organization. It is very good at looking at what is on the horizon in terms of sustainability and environmental policy. It works closely with policy stakeholders to understand what their issues are, not today, but what might be an issue in 2 to 5 years’ time and to tease out that with policymakers and then to bring that back into the institute and consider how the institute might bring its considerable intellectual resources to engage with that particular problem. There are very few organizations who have the capacity of the Nicholas Institute to do that because you really need to have a strong skillset in engaging with policymakers, be able to develop trust amongst them, talk their language, and to help them to think about what the issues might be in the future. That’s a capability that is not very visible, but I think Nicholas Institute staff are very good at doing that. And then of course, they have their own staff to work on these problems; for the university, the key thing is that they can also bring faculty from Duke schools in to support, to bring an additional level of expertise to solve those big policy issues.

That’s a different type of organization to some of the other institutes I am visiting, which are not so policy attentive but may be more internally focused on bringing faculty together in interdisciplinary teams. For the Nicholas Institute, it is probable that the external mission of doing policy-relevant research is at least as important than the internal mission of doing interdisciplinarity.

Bolger: Well, I should say that they’re doing a fantastic job. The survey results show that at least 30 to 60 percent of the project work which the Nicholas Institute is doing involves another member of faculty from a Duke school. So the Institute is doing a huge amount of interdisciplinary work, and that’s taken a long time to build up. I think they’ve had a lot of success with working groups, which is where they bring a group together around key themes such as ecosystem services or water. That working group consists of Nicholas Institute staff and affiliated faculty. Even though the working groups may wax and wane in the number of projects they are undertaking, the community of collaborators within the working groups still exists, and they can come together again depending on what project might come up.

Now the Institute has the Catalyst [Program] grants, which are a great initiative. The grants bring staff and faculty together to work on key projects of mutual interest. They give a relatively substantial amount of seed money to develop a project which might have the potential to grow and leverage a lot more money externally. I think it would serve the Nicholas Institute well to track the success of those kind of collaborations in terms of what happens to the seed money and what works and what doesn’t work in terms of facilitating interdisciplinarity so that the Institute could direct its money in the most productive direction in the future.

Nicholas Institute: Based on your own experience and the research that you’ve done so far, what do you see as opportunities for the Nicholas Institute to improve its interdisciplinary approach within the Duke community?

Bolger: If I was to suggest one thing the institute could do—and this would actually be as much for the university as the institute—is that doing interdisciplinary work can be challenging, and it takes more time and resources than disciplinary research. There’s a skillset associated with it, and that skillset is not always very obvious. There’s a disciplinary language barrier to get over. There’s a common understanding of the problem. I think that—this is not just true of Duke, but also true of other universities—those groups have to go through the painful process of understanding what that process is every time. It’s a black box. What happens at the moment is that every time the team finishes its project, the knowledge is lost because you’ve got to start all over again the next time.

So I think it would be really useful to have facilitators in the room to help those teams to work through the process. Interdisciplinary research is a process. There’s a way to do it. It doesn’t have to be a set of strict rules, but there certainly is a guiding framework for how to do good interdisciplinary research. So I think it would be really beneficial for Duke and for the Nicholas Institute—and other institutes—to have staff on call when a big project starts off that involves a number of disciplines. You could call on someone to sit in and particularly guide the commencement of that project so that it gets off to the right start and that it doesn’t fall at the first fence. That’s really about capturing the cumulative knowledge of how to do interdisciplinary research. So that would be one of the things that maybe Nicholas and Duke could think about.