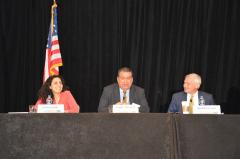 What are the primary drivers of change in the PJM region? Technology and people. That was the message from air and energy regulators from states in the PJM electricity market when they descended on Washington, D.C., May 2-3, to study regional trends alongside utilities, other power providers, investors, and advocates. The expert stakeholder workshop was co-sponsored by the Great Plains Institute (GPI) and Duke University’s Nicholas Institute for Environmental Policy Solutions.

As noted in a previous blog by GPI’s Doug Scott, the agenda featured a broad mix of speakers and a deep dive into the fundamental shifts underway on the grid. The themes of the workshop were change, and the tensions revealed as different actors—federal regulators, market operators, states, utilities, new technology providers, and consumers of electricity—drive these changes or respond to their effects.

A decade ago, PJM’s grid was dominated by coal and nuclear (the two provided 91% of the power to PJM in 2005). Then came the natural gas boom in the United States, as well as tech advances that brought down the cost for wind and solar. The result is clear: between 2010 and 2016, coal made up 79% of retired capacity in PJM, while natural gas and renewables drove 87% of new generation. Today, the regional power sector behaves differently than before, as large baseload units are replaced by more flexible gas plants or intermittent generation like wind and solar. Add to this a host of new products on the wholesale market, from energy storage and aggregated bids of distributed generation (rooftop solar) to demand response, where large energy consumers commit to dialing back use during high demand times. Technology changed the rules of the game—and drives a need to modernize U.S. grids to best incorporate advances.

People have been grid change makers, too. Corporate consumers of electricity with hefty sustainability goals—from Amazon to Walmart—are demanding cleaner power. Residential customers who want control over their energy are purchasing smart thermostats and signing up for electricity rates that change with time of use. Some customers want cleaner power and access to services like electric vehicle charging stations. Low natural gas prices are driving a shift away from coal. These market forces are driving de-carbonization of the PJM grid, even as the federal EPA proposes repealing the Obama-era greenhouse gas rule for power plants.

Regulators and the market are responding to change in different ways. States in the PJM footprint are balancing demands for renewable, nuclear and distributed energy against the concerns of coal communities, heavy industries reliant on cheap energy, and low-income ratepayers who will pay higher fixed costs. In response, states are deploying multiple energy policies that regional market participants sometimes view as inefficient or conflicting. At the Washington, D.C., workshop, states described policies designed to modernize the grid, deliver clean power and expand customer choice; they also highlighted programs aimed at shielding coal and nuclear plants—and the jobs they represent—from pressures to close. And while many regulators expressed support for the regional competitive market, they made clear their constituents and state policy prerogatives come first.

Market operators and defenders, on the other hand, want the market to signal when a plant or a technology should close or come online. At the event, they charged that state subsidies and policies dull this signal and could actually break the market. The debate is fierce, and has reached a head with PJM’s April 2018 filing with FERC, seeking changes in its capacity market pricing to neutralize state subsidies. Several speakers discussed needing to revisit how PJM makes decisions, and what role the states should play in that process.

Discussion also suggested paths forward. One utility embraced the idea of performance-based rates, so that states incentivize the right corporate investments. Another utility called on regulators to “tell the market what to solve for.” Economists and market defenders in the mix favor carbon pricing over other clean energy policies, to correct the market’s failure to reflect the cost of pollution. Meanwhile, states are pursing alternative strategies. Virginia’s chief air regulator described his state’s efforts to regulate power sector carbon and link to the Regional Greenhouse Gas Initiative (RGGI), the carbon trading program soon to include four PJM states.

The meeting coincided with the Mid-Atlantic’s first ozone alert days for the 2018 season, which was top of mind for the air regulators and partial motivation for discussions around electrifying the transportation sector, now the largest source of carbon emissions and other air pollution. The meeting also closely followed reports that more than 3600 MW of coal and nuclear could retire in the PJM this year. Such momentous change can be painful. We’ll likely need good state policies and well-functioning markets working together to manage this dynamic era.

For more information and videos on the expert stakeholder workshop, visit the event website.