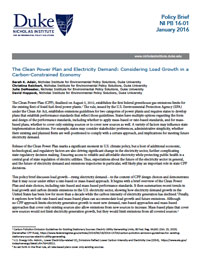 Release of the Clean Power Plan (CPP) marks a significant moment in U.S. climate policy, but a host of economic, technological, and regulatory factors are also driving significant change in the electricity sector, complicating state regulatory decision making. Ensuring access to reliable and affordable electricity while protecting public health is a central goal of state regulation of electric utilities. Thus, expectations about the future of the electricity sector in general, and the future of electricity demand and emissions trajectories in particular, will likely play an important role in state CPP decisions. This policy brief discusses load growth—rising electricity demand—in the context of CPP design choices and demonstrates that it may occur under either a rate-based or mass-based approach. Following a brief overview of the Clean Power Plan and state choices, including rate-based and mass-based performance standards, it summarizes recent trends in load growth and carbon dioxide emissions in the U.S. electricity sector, showing how electricity demand growth in the United States has been low for more than a decade while the carbon intensity of electricity generation has declined. It then explores how both rate-based and mass-based plans can accommodate load growth and future emissions. Although no CPP approach limits electricity generation growth to meet new demand, rate-based approaches and mass-based approaches that cover only existing sources also allow emissions from new sources to increase. Mass-based plans that cover new sources would not limit electricity generation growth, but they would limit emissions from all covered sources.