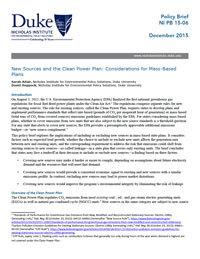 On August 3, 2015, the U.S. Environmental Protection Agency (EPA) finalized the first national greenhouse gas regulations for fossil fuel-fired power plants under the Clean Air Act. The regulations comprise separate rules for new and existing sources. The rule for existing sources, called the Clean Power Plan, requires states to develop plans and implement performance standards that reflect rate-based (pounds of CO2 per megawatt hour of generation) or mass-based (total tons of CO2 from covered sources) emissions guidelines established by the EPA. For states considering mass-based plans, whether to cover emissions from new units that are also subject to the new source standards is a threshold question. For any state that elects to cover new sources, the EPA provides a presumptively approvable additional emissions budget—or “new source complement.” This policy brief explores the implications of including or excluding new sources in mass-based state plans. It considers factors such as expected load growth, whether the choice to include or exclude new units affects the generation mix between new and existing units, and the corresponding requirement to address the risk that emissions could shift from existing sources to new sources—so-called leakage—in a state plan that covers only existing units. The brief concludes that states may face a tradeoff in their decision to include or exclude new sources—a finding based on three factors. First, covering new sources may make it harder or easier to comply, depending on assumptions about future electricity demand and the resources that will meet that demand. Second, covering new sources would provide a consistent economic signal to existing and new sources with a similar emissions profile. In contrast, excluding new sources may lead to power market distortions. Third, covering new sources would improve the environmental integrity of the program by eliminating the risk of leakage.