Coral Reefs and People in a High CO2 World: Where Can Science Make a Difference to People? 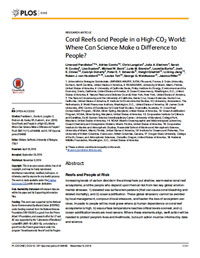 Increasing levels of carbon dioxide in the atmosphere put shallow, warm-water coral reef ecosystems, and the people who depend upon them at risk from two key global environmental stresses: 1) elevated sea surface temperature that can cause coral bleaching and related mortality, and 2) ocean acidification. These rising CO2 levels may affect most of the world’s coral reefs and the populations which depend on them by 2050, according to this study in the journal PLOS ONE. The study projects that countries in western Oceania would be amongst the first affected by CO2-driven coral reef stress, followed by Southeast Asian countries in the Coral Triangle such as Indonesia, which are highly dependent on coral reefs. Countries predicted to be most likely to experience severe ocean acidification are generally different from those predicted to experience the earliest onset of coral bleaching, with acidification projected to be worse for countries at the upper and lower latitudinal bounds of coral reef distribution such as Baja California (Mexico), Japan, China, and southern Australia. Unfortunately, many of the countries that are most dependent upon coral reefs are also the countries for which data are least robust, and the authors note that international and regional efforts will be needed to overcome obstacles to obtaining good data globally.