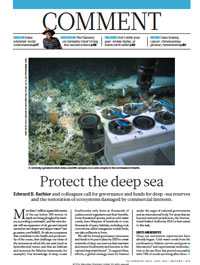 Formal governance structures and funds need to be put in place by 2020 to create networks of sea-floor reserves that maintain and restore biodiversity and functioning of deep-sea ecosystems, writes the Nicholas Institute for Environmental Policy Solutions Linwood Pendleton and colleagues in a comment piece in the journal Nature.

More than one million square kilometres of the sea below 200 metres in depth are being ploughed by trawlers, and the next decade will see expansion of oil, gas and mineral extraction into deeper waters. At risk are ecosystems that contain thousands of undiscovered organisms, that contribute to the health and productivity of the ocean, that challenge our ideas of the extremes at which life can exist, and that are habitat and nursery for fisheries. Some threatened species have lifespans of hundreds of thousands of years or live in habitats that take millennia to form. The 2015 U.N. General Assembly should develop a new body to protect deep sea biodiversity, or extend the mandate of the International Seabed Authority (ISA) beyond mining to protect the deep-sea from a wider range of regulated commercial industrial activities, the authors suggest. The ISA could then apply the Convention on Biological Diversity targets for protecting and restoring 10% of the oceans, including the deep sea, by 2020. This conservation activity would require around $30 million per annum, which could be raised by taxing extractions from the deep sea, Pendleton and his co-authors propose.