Recent years have seen an increased focus on voluntary conservation under the Endangered Species Act (ESA). Though many approaches draw from the broad authorizations outlined in Section 10 of the ESA, stakeholder experience with plans and agreements under this portion of the ESA remain an understudied area of research. To address this important data gap, the Nicholas Institute for Environmental Policy Solutions is working on exploratory analysis covering plan and agreement applicant composition, covered species numbers and land use types, permit approval timing, and change in plan composition over time. By gauging these measures of composition, usage, and administration, the research looks to identify gaps in the policy landscape and to better target existing tools to situations in which they may be of greatest use.

Characteristics, Trends of At-Risk Species in the Southeast U.S.

Patterns of Petitioned and Candidate Species

More than 300 species in the southeast United States are now being considered for listing as threatened or endangered, nearly doubling the number of the region’s recognized at-risk species. This recent jump in the number of petitioned and candidate species prompted the Nicholas Institute for Environmental Policy Solutions to question the potential for multi-species management opportunities to more efficiently address at-risk species management. We conducted an exploratory analysis of publicly available data to present aggregated information about the spatial distributions and characteristics of at-risk species in the southeast U.S. We also overlaid petitioned and candidate species numbers with different land uses. These overlays suggest potential threats in specific areas that could be examined more carefully. They also indicate potential opportunities for leveraging other resource management policies or programs—such as the Farm Bill programs and mitigation under the Clean Water Act—that could potentially support pre-listing, multi-species management actions. While our work focuses on the southeast as a whole, we also suggest how this regional analysis could be used to identify areas that would benefit from further analysis at a finer scale.

Within the southeast U.S., at-risk species are widely dispersed, but show some concentration in the Appalachian Mountains and Florida. In general, at-risk species have low mobility and are non-migratory, suggesting that these species may have difficulty benefitting from off-site conservation measures. When considering only petitioned and candidate species, the Southeast Plains ecoregion has the highest number of species, but the Ridge and Valley ecoregion of the Appalachians has a much higher species per unit area and therefore may be of higher conservation priority.

We overlaid petitioned and candidate species numbers with two land uses (urban areas, agricultural lands), one potential threat measure (impacted waters), and currently protected areas and public lands. Petitioned and candidate species numbers generally decrease as the percent of urban area in a county or watershed increases. Counties or watersheds with at least 25% urban land cover have on average 2–3 at risk species, but this finding may reflect their extirpation. 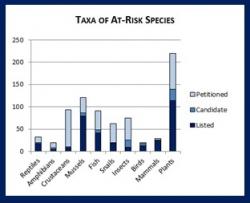 Waterways can be impacted through impairment by pollutants or alternation via dams. Because reporting requirements for 303d impaired waters is not standardized, no conclusions about the distribution of petitioned and candidate species in relation to impaired waters can be drawn at the regional scale. Dam concentrations are highest throughout the Appalachians, and it may be useful for managers in these areas to consider how significant changes in water flow may impact petitioned and candidate species in the mountains. Relatively high numbers of at-risk species are found in protected areas and public lands.  For some species, this situation may be promising, but we cannot conclude from this analysis that individual species are sufficiently protected.

This analysis is based on publically available data that is largely dependent on county and watershed information and spotty data on characteristics of at-risk species. Given these constraints, the information provides rough approximations of trends and suggests areas that should be explored in greater detail. More detailed statistical analyses using element occurrence data from State Heritage programs could answer questions like “Which suite of counties, if protected adequately, will provide some level of protection for a large number of at-risk species?” or “Are there opportunities to manage groups of species with similar habitat and characteristics that would be more efficient than managing species alone?”

This work is the result of an internal scoping and exploratory analysis, and has not been peer-reviewed. Nevertheless, we hope it will initiate discussion on effective and efficient pre-compliance management for at-risk species in the Southeast.