Power Sector Competition in the Southeast

A rapidly changing power sector presents both challenges and opportunities for vertically integrated utilities, their customers, third-party providers, and state regulators in “cost-of-service” states, such as in much of the Southeast. Under the cost-of-service model, the state grants a monopoly to a vertically integrated utility that is responsible for generating, transmitting, and distributing electricity to consumers in a specific territory. The utility charges state-regulated rates to customers seeking to compensate the utility for its costs plus a return on capital investments. Some of the largest investor-owned utilities in the United States are headquartered in the Southeast under this model.

Over the last two decades, other parts of the country have restructured utilities and turned over operation of the transmission system to Regional Transmission Organizations (RTOs). States on the periphery of the Southeast, such as Virginia and Arkansas, have joined RTOs. The region, however, has mostly stayed with the more traditional cost-of-service model.

Stakeholders and policy makers in the Southeast are now engaging in conversations to explore the role competition could have in facilitating clean energy investment, encouraging innovation, and lowering costs for consumers.

Short of restructuring and joining RTOs, competition may be introduced to lessor degrees, such as requiring a utility to consider competitive wholesale procurements as a way to meet some of its load or enabling third-party participation in retail markets. These steps may incentivize utilities to be more efficient and responsive to customer demand. Recent examples of state legislatures enabling this type of competition in the Southeast include for rooftop solar in Georgia and utility-scale solar in North Carolina.

The Nicholas Institute’s Climate and Energy Program is writing a series of papers intended to describe competition options for the Southeast and to help inform states and stakeholders engaged in discussions about the future of the power sector. The papers will be available on this page below as they are published. Topics will include: 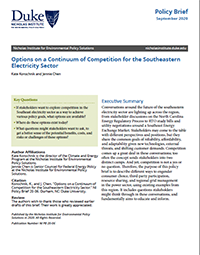 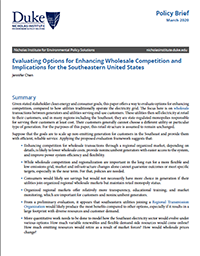 Given stated stakeholder clean energy and consumer goals, this paper offers a way to evaluate options for enhancing competition, compared to how utilities traditionally operate the electricity grid. The focus here is on wholesale transactions between generators and utilities serving end-use customers. These utilities then sell electricity at retail to their customers, and in many regions including the Southeast, they are state-regulated monopolies responsible for serving their customers at least cost. 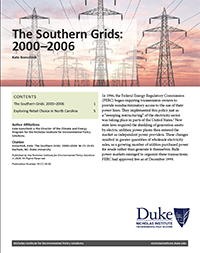 This case study lays out the four Southern proposals submitted to FERC, and chronicles how this directive played out in the South. In a sidebar, the case study also describes the retail competition vision being explored in North Carolina during the same time period. While the Southern Grids did not launch, the GridSouth (in the Carolinas) and the GridFlorida proposals reflect a concerted effort by the participating utilities to explore market creation, as well sustained engagement – and some support – by regulators and stakeholders. 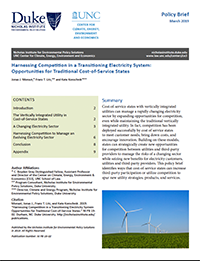 Search for more on Power Sector Competition in the Southeast →