Opportunities for Coral Reefs at the Ocean-Climate Policy Nexus 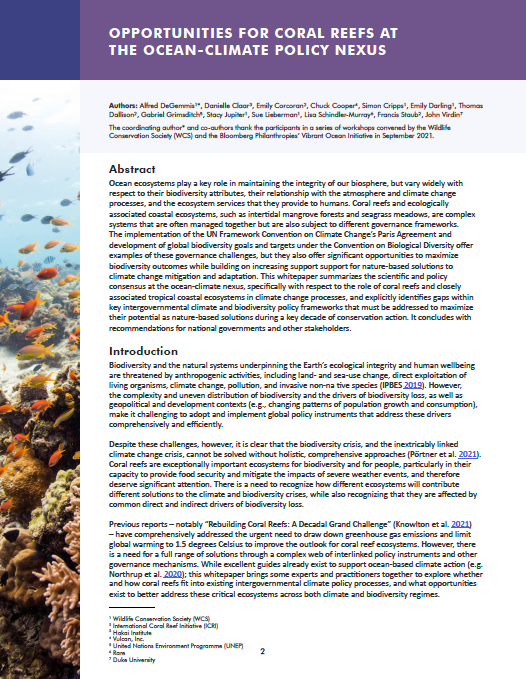 Ocean ecosystems play a key role in maintaining the integrity of our biosphere, but vary widely with respect to their biodiversity attributes, their relationship with the atmosphere and climate change processes, and the ecosystem services that they provide to humans. Coral reefs and ecologically associated coastal ecosystems, such as intertidal mangrove forests and seagrass meadows, are complex systems that are often managed together but are also subject to different governance frameworks. The implementation of the UN Framework Convention on Climate Change’s Paris Agreement and development of global biodiversity goals and targets under the Convention on Biological Diversity offer examples of these governance challenges, but they also offer significant opportunities to maximize biodiversity outcomes while building on increasing support support for nature-based solutions to climate change mitigation and adaptation. This whitepaper summarizes the scientific and policy consensus at the ocean-climate nexus, specifically with respect to the role of coral reefs and closely associated tropical coastal ecosystems in climate change processes, and explicitly identifies gaps within key intergovernmental climate and biodiversity policy frameworks that must be addressed to maximize their potential as nature-based solutions during a key decade of conservation action. It concludes with recommendations for national governments and other stakeholders.