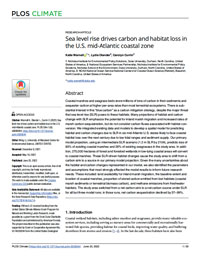 Coastal marshes and seagrass beds store millions of tons of carbon in their sediments and sequester carbon at higher per-area rates than most terrestrial ecosystems. There is substantial interest in this “blue carbon” as a carbon mitigation strategy, despite the major threat that sea level rise (SLR) poses to these habitats. Many projections of habitat and carbon change with SLR emphasize the potential for inland marsh migration and increased rates of marsh carbon sequestration, but do not consider carbon fluxes associated with habitat conversion. We integrated existing data and models to develop a spatial model for predicting habitat and carbon changes due to SLR in six mid-Atlantic U.S. states likely to face coastal habitat loss over the next century due to low tidal ranges and sediment supply. Our primary model projection, using an intermediate SLR scenario (1.2 m SLR by 2104), predicts loss of 83% of existing coastal marshes and 26% of existing seagrasses in the study area. In addition, 270,000 hectares of forest and forested wetlands in low-lying coastal areas will convert to coastal marshes. These SLR-driven habitat changes cause the study area to shift from a carbon sink to a source in our primary model projection. Given the many uncertainties about the habitat and carbon changes represented in our model, we also identified the parameters and assumptions that most strongly affected the model results to inform future research needs. These included: land availability for inland marsh migration, the baseline extent and location of coastal marshes, proportion of stored carbon emitted from lost habitats (coastal marsh sediments or terrestrial biomass carbon), and methane emissions from freshwater habitats. The study area switched from a net carbon sink to a net carbon source under SLR for all but three model runs; in those runs, net carbon sequestration declined by 57–99%.