Unconventional Oil and Gas Spills: Materials, Volumes, and Risks to Surface Waters in Four States of the U.S. 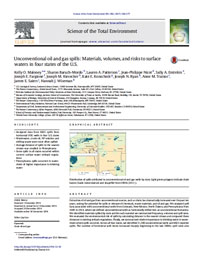 A new article in the journal Science of the Total Environment examines spill data associated with unconventional oil and gas wells from Colorado, New Mexico, North Dakota, and Pennsylvania from 2005 to 2014. The authors used the data to evaluate the environmental risk of spills. They found that there were 21,300 unconventional wells and 6,622 reported spills. Across all states, the average distance of spills to a stream was highest in New Mexico, followed by Colorado, North Dakota, and Pennsylvania. Pennsylvania spills occurred in watersheds with a higher relative importance to drinking water than the other three states.