Nicholas Institute for Environmental Policy Solutions
← All Publications
May 2009

How Might Carbon Prices and Energy Costs Affect Returns to Agricultural Producers? 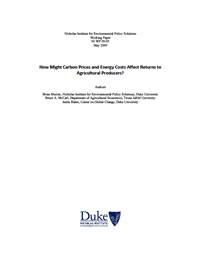 A report issued by Doane Advisory Services in May 2008 titled "An Analysis of the Relationship between Energy Prices and Crop Production Costs" has received recent attention as some interest groups have used it as evidence of how a federal cap-and-trade program, or any similar climate policy that creates a price on greenhouse gases, would negatively affect U.S. farmers. The study takes energy prices from the U.S. Environmental Protection Agency's economic analysis of the Lieberman-Warner America Climate Security Act and combines them with U.S. Department of Agriculture data on input costs from the eight largest crops (by value) in the United States to guage how the higher energy costs expected under greenhouse gas controls translate into higher farm operating costs.