Incentivizing the Reduction of Pollution at U.S. Dairies 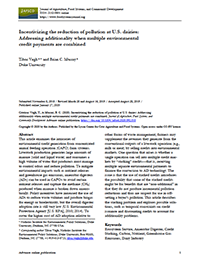 This article examines the intricacies of environmental credit generation from concentrated animal feeding operation (CAFO) farm systems. Livestock production generates large amounts of manure (solid and liquid waste) and consumes a high volume of water that producers must manage to control odors and reduce pollution. To mitigate environmental impacts such as nutrient releases and greenhouse gas emissions, anaerobic digesters (ADs) can be used in CAFOs to avoid certain nutrient releases and capture the methane (CH4) produced when manure is broken down anaero­bically. Policy incentives have increased the use of ADs to reduce waste volumes and produce biogas for energy or bioelectricity, but the overall digester adoption rate is still very low (U.S. Environmental Protection Agency [U.S. EPA], 2010; 2014). To cover the higher cost of AD adoption relative to other forms of waste management, farmers may supplement the revenues they generate from the conventional outputs of a livestock operation (e.g., milk or meat) by selling credits into environmental markets. One question that arises is whether a single operation can sell into multiple credit mar­kets by “stacking” credits—that is, receiving multiple separate environmental payments to finance the conversion to AD technology. The issue is that the use of stacked credits introduces the possibility that some of the stacked credits might be for benefits that are “non-additional” in that they do not produce incremental pollution reductions and thus are suspect for use in off­setting a buyer’s pollution. This article describes the stacking problem and explores possible solu­tions, such as temporal constraints on credit issuance and discounting credits to account for additionality problems.