Incentivizing the Reduction of Pollution at Dairies: How to Address Additionality When Multiple Environmental Credit Payments Are Combined 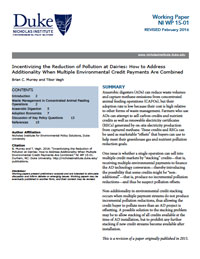 Anaerobic digesters (ADs) can reduce waste volumes and capture methane emissions from concentrated animal feeding operations (CAFOs), but their adoption rate is low because their cost is high relative to other forms of waste management. Farmers who use ADs can attempt to sell carbon credits and nutrient credits as well as renewable electricity certificates (RECs) generated by on-site electricity production from captured methane. These credits and RECs can be used as marketable “offsets” that buyers can use to help meet their greenhouse gas and nutrient pollution reduction goals. One issue that arises is whether a single operation can sell into multiple credit markets by “stacking” credits—that is, receiving multiple environmental payments to finance the conversion to AD technology. This practice introduces the possibility that some credits might be “non-additional”—i.e., produce no incremental pollution reductions—and thus be suspect pollution offsets. Non-additionality in environmental credit stacking occurs when multiple payment streams do not produce incremental pollution reductions, thus allowing the credit buyer to pollute more than is being offset by the AD project. A possible solution to the stacking problem may be to allow stacking of all credits available at the time of AD installation, but to prohibit any further stacking if new credit streams become available after installation. This is a revised paper that was originally published in 2015.

This paper has been subsequently revised and published in the Journal of Agriculture, Food Systems, and Community Development.