Characterization of Drought in the South Atlantic, United States 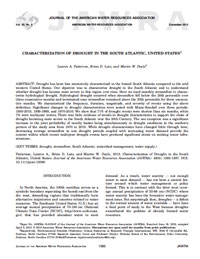 In this Journal of the American Water Resources Association article, authors aim to characterize drought in the South Atlantic and to understand whether drought has become more severe in this region over time using monthly streamflow to characterize hydrological drought. Significant changes in drought characteristics were tested with Mann-Kendall over three periods: 1930-2010, 1930-1969, and 1970-2010. Authors show that 71% of drought events were shorter than six months, while 7% were multiyear events. There was little evidence of trends in drought characteristics to support the claim of drought becoming more severe in the South Atlantic over the 20th Century. The one exception was a significant increase in the joint probability of nearby basins being simultaneously in drought conditions in the southern portion of the study area from 1970 to 2010. While drought characteristics have changed little through time, decreasing average streamflow in non drought periods, coupled with increasing water demand, provide the context within which recent multiyear drought events have produced significant stress on existing water infrastructure.