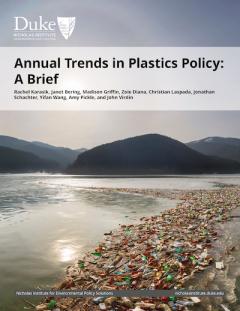 DURHAM, N.C. — A new analysis from Duke University's Nicholas Institute for Environmental Policy Solutions suggests efforts to address plastic pollution have slowed worldwide during the COVID-19 pandemic. That time period has also seen a documented rise in medical waste and single-use and disposable plastics for personal protective equipment and packaging.

For two years, a team of researchers and students has maintained and regularly updated an inventory that now contains more than 570 public policies introduced around the world since 2000 to target plastic pollution. While the number of national policies had steadily increased for 20 years, the trend appeared to stall in 2020 and 2021, according to a brief detailing the researchers’ analysis.

“The overall effect of the ongoing pandemic on plastic pollution and policy implementation is not fully understood yet, but a few findings are beginning to percolate,” said the brief’s lead author, Rachel Karasik, policy associate at the Nicholas Institute. “The increase in plastic consumption and waste resulting from the pandemic is happening at the same time that many governments are reversing or pausing implementation of plastics policies. Some countries, however, have continued to address plastic pollution by passing policies that are more comprehensive — for example, targeting single-use plastics other than plastic bags.”

Global policymakers will consider an agreement to reduce plastic pollution at the U.N. Environment Assembly’s next session in Nairobi, Kenya, from Feb. 28 through March 2. Negotiators are scheduled to discuss a global treaty that would create legally binding rules for the use and disposal of plastics.

“We hope that this updated analysis can be useful in the upcoming U.N. session discussing a legally binding, global treaty to reduce plastic pollution,” Duke Ph.D. candidate Zoie Diana said. “Our analysis starts to shed light on what is currently encompassed in the global plastics policy response and what is missing, such as the types of plastics targeted and policy instruments adopted.”

An estimated 11 million metric tons of plastic enter the world’s oceans each year, and the accumulation of plastic pollution threatens marine ecosystems and the communities that depend on them. Plastics are also arriving in unexpected places — from the deep sea to the atmosphere to soil — creating a range of potential environmental, public health and socioeconomic issues.

The brief is intended to be the first in a series of annual updates tracking worldwide trends and gaps in government responses to the problem. In addition to the recent slowdown in new national policies, other key findings include:

The Nicholas Institute launched the Plastics Policy Inventory and a companion analysis in 2020 with funding and support from The Pew Charitable Trusts as part of its Preventing Ocean Plastics project. The inventory initially catalogued nearly 300 policies at the subnational, national and international levels from 2000 to mid-2019.

In March 2021, the U.N. Development Programme, with support from the governments of Sweden and Norway, recognized the inventory as one of eight winning projects in its inaugural Ocean Innovation Challenge. The innovations were selected from more than 600 proposals to accelerate progress on reducing marine pollution. Duke researchers utilized challenge funding to almost double the number of policies available in the inventory, adding newly introduced ones and capturing some that were unaccounted for during the initial search.

The inventory is one example of the interdisciplinary research being conducted into plastics pollution at Duke. Comprised of faculty and students from nine Duke schools and departments, the university’s Plastic Pollution Working Group is aiming to better understand the issues around plastic pollution while working to develop solutions.