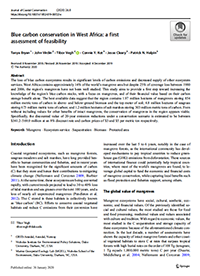 The loss of blue carbon ecosystems results in significant levels of carbon emissions and decreased supply of other ecosystem services. West Africa contains approximately 14% of the world’s mangrove area but despite 25% of coverage loss between 1980 and 2006, the region’s mangroves have not been well studied. This study aims to provide a first step toward increasing the knowledge of the region’s blue carbon stocks, with a focus on mangroves, and of their financial value based on their carbon storage benefit alone. The best available data suggest that the region contains 1.97 million hectares of mangroves storing 854 million metric tons of carbon in above- and below-ground biomass and the top meter of soil; 4.8 million hectares of seagrass storing 673 million metric tons of carbon; and 1.2 million hectares of salt marshes storing 303 million metric tons of carbon. Even without including values for other benefits of intact mangroves, the conservation of mangroves in the region appears viable. Specifically, the discounted value of 20-year emission reductions under a conservation scenario is estimated to be between $341.2–569.0 million at an 8% discount rate and carbon prices of $3 and $5 per metric ton respectively.