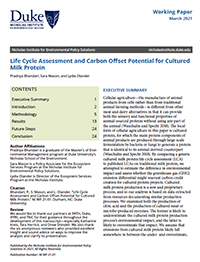 Cultured milk proteins are proteins manufactured in a lab through fermentation rather than from traditional animal farming methods. These proteins are identical to those found in milk (casein and whey), but are created using bacteria or fungi instead of any part of an animal. As humanity faces the problem of feeding an exponentially growing population, cultured proteins have emerged as one potential way to generate consumable protein without the harmful environmental impacts of expanding agricultural production.

(1) How does the environmental footprint of cultured milk protein compare to that of traditional milk protein (derived from cows)?

By comparing a generic cultured milk protein life cycle assessment (LCA) to published LCAs on traditional milk protein, we attempted to estimate the difference in environmental impact and assess whether the GHG emission differential might warrant carbon credit creation for cultured protein projects.