A snapshot of the economic benefits from foreign bottom trawling in coastal West Africa: A mutually-beneficial trade in services, no winners or extractivism? 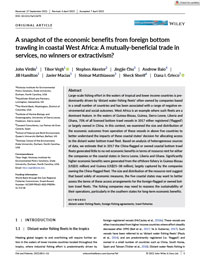 Large-scale fishing effort in the waters of tropical and lower income countries is predominantly driven by ‘distant water fishing fleets’ often owned by companies based in a small number of countries and has been associated with a range of negative environmental and social outcomes. West Africa is an example where such fleets are a dominant feature. In the waters of Guinea-Bissau, Guinea, Sierra Leone, Liberia and Ghana, 75% of all licensed bottom trawl vessels in 2017 either registered (‘flagged’) or largely owned in China. In this context, we examined the size and distribution of the economic outcomes from operation of these vessels in above five countries to better understand the impacts of these coastal states’ decision for allocating access to the distant water bottom trawl fleet. Based on analysis of heterogeneous sources of data, we estimate that in 2017 the China-flagged or owned coastal bottom trawl fleets generated little to no net economic benefits in terms of resource rent for either the companies or the coastal states in Sierra Leone, Liberia and Ghana. Significantly higher economic benefits were generated from the offshore fishery in Guinea-Bissau (US$31 million) and Guinea (US$25–38 million), largely captured by the companies owning the China-flagged fleet. The size and distribution of the resource rent suggest that based solely of economic measures, the five coastal states may want to better assess the terms of these access arrangements for the foreign-flagged or owned bottom trawl fleets. The fishing companies may need to reassess the sustainability of their operations, particularly in the southern states for long-term economic benefits.