The rapid growth of unconventional oil and gas, also referred to as hydraulic fracturing, transformed the energy landscape. New areas became sites of energy extraction, such as the Marcellus Shale Play in Pennsylvania and the Bakken Play in North Dakota. The intrusion of large amounts of inexpensive gas, coupled with the desire for cleaner energy sources, resulted the retirement of many coal-fired power plants and the establishment of natural gas power plants. The coal-to-gas transition had significant impacts on water resources because it requires water to extract fossil fuels from the ground and the amount of water needed to cool power plants is dependent on the type of plant and its energy source.

The Nicholas Institute for Environmental Policy Solutions partnered with several institutions to explore the effects of hydraulic fracturing on water resources due to withdrawals, the potential impact to ecosystems and the environment from withdrawals and spills, and the impact on the road infrastructure in Pennsylvania where the disposal of waste was challenging due to the underlying geology. Each exploration produced a publication and a data visualization tool to explore the effects of water, spills, and waste disposal.

How is the transition from coal-to-gas affecting water resources?

Exploring changes in water consumption in Pennsylvania from the oil-to-gas transition: 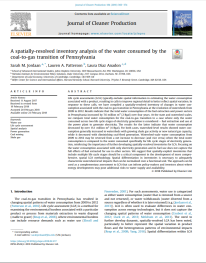 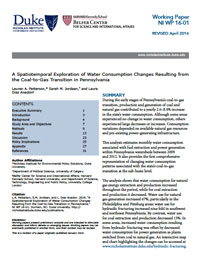 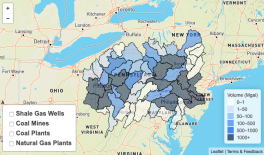 The impact of the coal-to-gas transition varies spatially and is dependent on the location of pre-existing power infrastructure (coal and gas plants) and whether natural gas available for power extraction. Water use for natural gas generation increased 67%, particularly in the Philadelphia and Pittsburg areas; water use for hydraulic fracturing increased nine fold in southwest and northeast Pennsylvania. By contrast, water use for coal extraction and production decreased 13%. In some areas, increased water consumption from hydraulic fracturing was offset by decreased water consumption for power generation as plants switched from coal to natural gas. These findings indicate the importance of considering the implications of both energy extraction and production on water resources. 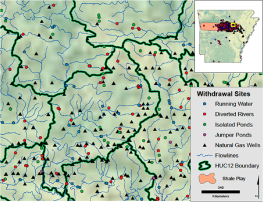 Hydraulic fracturing requires intensive, high volume water use over a short duration (a few days). Permitted and actual water withdrawals were compared with low, median, and high streamflows to estimate potential stress to aquatic ecosystems. Daily water usage compared with median streamflow showed possible water stress in 7 to 51% of catchments in the summer and fall. Policies that support recycled water use and declines in new well installations can reduce water stress in basins. Collecting good withdrawal and streamflow data are critical to monitor and mitigate cumulative impacts from withdrawals on streams.

How do we manage and mitigate risks from spills? 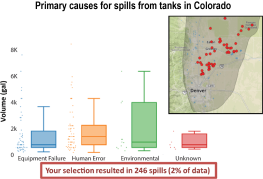 Unconventional oil and gas has seen rapid growth in recent years and has raised environmental concerns over both the frequency, type of material, and cause of spills. Spills data were collected for over 30,000 wells from in Colorado, New Mexico, North Dakota, and Pennsylvania between 2005 and 2014. Spills were most likely to occur within the first three years of well life at tanks or flowlines. States collect rich spill data, however the reporting requirements differ across states and required considerable effort to make data usable for large-scale analysis. Making state spill data more uniform and accessible could provide stakeholders with important information on where to target efforts for locating and preventing future spills.

Unconventional Oil and Gas Spills: Materials, Volumes, and Risks to Surface Waters in Four States of the U.S. 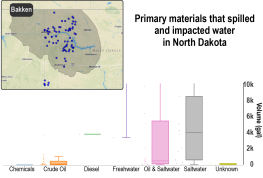 Spills data were collected for over 30,000 wells from in Colorado, New Mexico, North Dakota, and Pennsylvania between 2005 and 2014. The frequency of spills, type of material spilled, volume of material spilled, and proximity of the spill to surface waters and other ecologically sensitive systems were used to assess the environmental risk of UOG. The average distance of spills to streams was shortest in Pennsylvania (268 m) and greatest in New Mexico (1,379 m), with 7 to 20.5% of spills occurring within already existing surface water setback regulations.

Where is produced water going and what are its impacts? Or How is rapid unconventional oil and gas development impacting public infrastructure?

Transport of Hydraulic Fracturing Waste from Pennsylvania Wells: A County-Level Analysis of Road Use and Associated Road Repair Costs 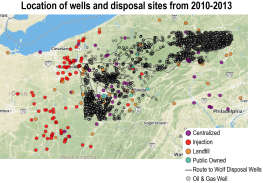 Pennsylvania’s rapid unconventional oil and gas development from 2004 to 2013 dramatically increased unconventional oil and gas waste transport by heavy trucks. The geology within Pennsylvania does not allow for the common practice of nearby underground injections of waste. Instead, waste must be transported to disposal sites, increasing the cost of road repairs not only in Pennsylvania but in counties in the surrounding states of West Virginia, Maryland, New Jersey, Ohio, and New York. Between July 2010 and December 2013, the estimated cost to repair roads damaged by such transport ranged from $3 million to $18 million, with most costs concentrated in Pennsylvania (79 percent) and Ohio (16 percent).

Search for more on Unconventional Oil and Gas Development →