How are U.S. Army Corps of Engineers reservoirs performing under changing conditions?

1. Creating Data as a Service for U.S. Army Corps of Engineers Reservoirs 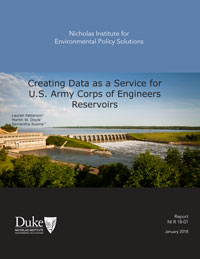 The U.S. Army Corps of Engineers, similar to many federal agencies, decentralizes the management of operations to regions. The Corps manages their reservoir operations through their districts. The data needed to understand reservoir performance (particularly reservoir levels and management goals) had to be collected and standardized from the districts to create a single database. The interoperable database enables exploration of reservoir operations by one organization across the United States. 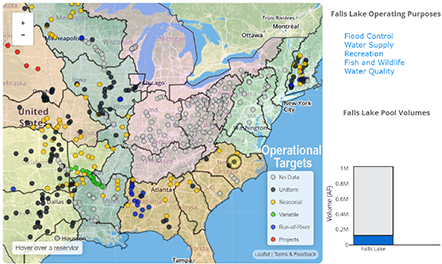 This database was used was used to assess the timing, frequency, duration, and magnitude of departures between reservoir levels and their goals for 233 individual reservoirs. The majority of reservoirs are consistently meeting their operating targets, 30% were borderline, and 13% of reservoirs experienced frequent and large departures. The majority of reservoirs struggling to meet their management goals are due to water shortages in the Southwest, an area with higher temperatures, low rainfall, and a growing population.

How are environmental and societal conditions changing relative to the time when reservoirs were designed and built? 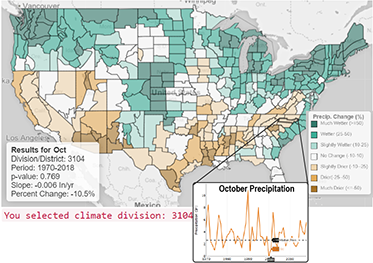 Reservoirs are designed and managed with a set of assumptions about the environmental, societal, and regulatory factors influencing the amount of water entering and leaving the reservoir. Factors influencing the timing and volume of water in a reservoir include environmental (such as temperature, precipitation, and sedimentation), societal (energy demand, water demand, and population growth), and regulatory (such as the Endangered Species Act). This paper and tool explore these factors, and how they have changed over time, across the nation. 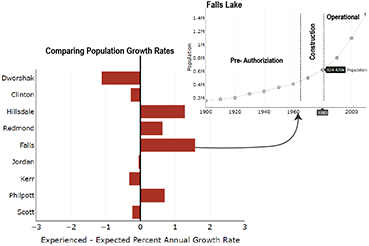 The design documents for nine reservoirs were obtained in order to compare the conditions at the time of reservoir design with current conditions. Some reservoirs are experiencing very different conditions than present at the time of reservoir design. For instance, sedimentation at Philpott, North Carolina was 15% less than expected whereas Redmond, Kansas had twice the expected rate. In some cases, reservoirs are updating water control plans and reallocating to meet these changing conditions. Currently, Falls, North Carolina is seeking reallocation due to higher than expected population growth and water demand.

How is the Corps adapting reservoir operations to meet changing conditions? 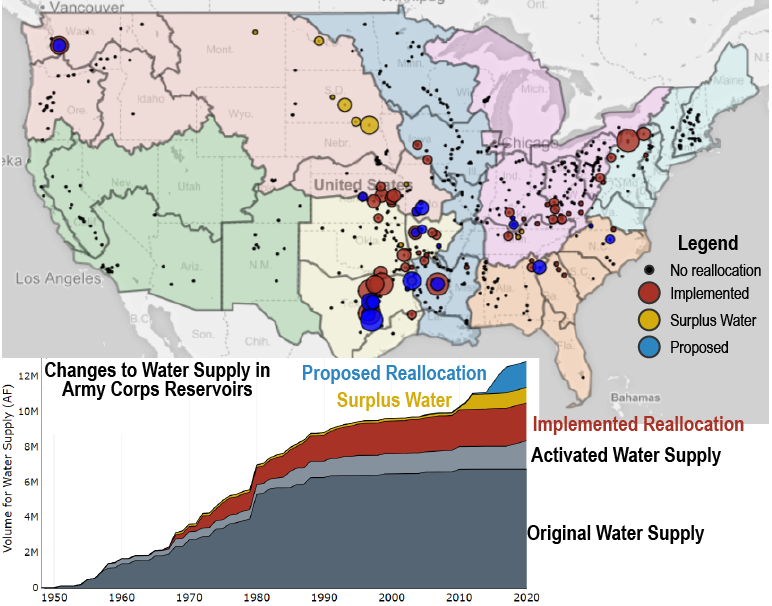 Reservoir operations must respond to changing conditions, such as climate, water demand, regulations, and sedimentation. Corps Districts and Divisions are adapting to changing conditions different. Some rely on reallocations while others rely on discretionary authority and temporary deviations. The differences in response reflect the decentralized decision-making the Corps relies on to respond to disparate condition. However, this can lead to drift from formal management operations, rather than a formal adaptation through reallocation (a resource intensive process). The challenge for any large water resource management agency is to balance between local-level, responsive discretion vs centralized, planned decision-making.